Compared to the UK, there are very few prison museums in France and it appears that here the history of incarceration is not seen as meriting celebration in itself. Representations of incarceration are found in art galleries and even when the intention is to offer progressive critique of the penal system, the images displayed, particularly when it comes to prison photography, often tend to embody clichés of what it means to be locked up – the mug shot, the silhouetted figure, the bars and locks. There is also debate as to whether prison buildings should be celebrated and commemorated for their architectural innovation and prowess as examples of France’s patrimoine. This was the case when the Prison de la Santé opened to the public during its renovation as part of the Journée du Patrimoine in 2014. As the Huffington Post in France reported: ‘Difficile de prime abord de trouver un juste équilibre entre l’intérêt historique du bâtiment et le quotidien des détenus et du personnel qui ont vécu entre ces murs.’ http://www.huffingtonpost.fr/2014/09/15/journees-patrimoine-prison-sante-ouvre-portes-visite-guidee_n_5823160.html. Debates also surround how now defunct prisons should be restored and reused such as the use of the former Prison Sainte Anne in Avignon which temporarily housed the Lambert Collection exhibition ‘The Disappearance of the Fire Flies’ in 2014. See http://www.collectionlambert.fr/en/event/151/the-disappearance-of-the-fireflies.html 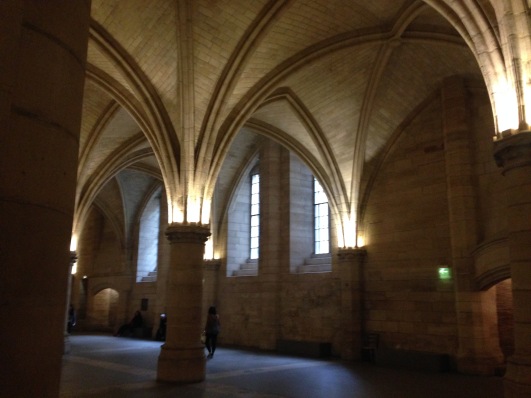 Questions about whether to ‘celebrate’ the space of a former prison and its activities are partly evaded at La Conciergerie since the building fits into a larger narrative of the history of France’s ruling classes. The building which has undergone structural development and changes spanning 900 years (from the 10th until the 19th century) forms part of a larger complex composed of the Palais de Justice and Sainte Chapelle. Visitors enter via the impressive great hall which once constituted the Palace kitchens. The cells were added only later in the building’s history as France’s judicial system developed. Nevertheless, there are concerted attempts to carefully regulate the memory and narrative offered up by the space. The ‘salle des gardes’ is almost bare of commentary bar a historical timeline of the building’s construction and development. Staircases leading to the ‘Enceinte Cellulaire’ and the ‘Parloirs des Avocats’ are chained off. 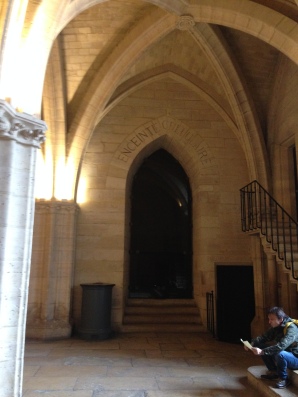 Walking from the ‘salle des gardes’ to the ‘prison révolutionnaire’ exhibition (via the librarie and gift shop) I looked up at another set of steps leading to a closed lead door. The security guard sitting at the bottom of the steps noticed me looking up and said ‘Vous voulez aller à la prison? C’est pas bon ça.’ As if my curiosity was a dangerous things. Which if course it is. 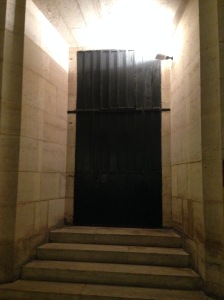 Yet, the cells and their celebrity inmates are the whole raison d’être of visiting the conciergerie and what justifies a trip in a city oversaturated with historical monuments. As I entered the ‘prison révoutionnaire’ exhibition (which I already mentioned had to be accessed via the gift shop) a number of other tourists stopped to ask another security guard where Marie-Antoinette’s cell was located. The guard avoided a direct answer (a reconstruction of her cell was immediately direct to his left) and insisted they follow ‘la suite de la visite’ which takes you past reconstructed cells, upstairs to a set of panels and display cabinets, then to the chapelle expiatoire (the site of Antionette’s actual cell), outside to the courtyard belonging to the women’s prison before re-entering at the exhibition’s starting point where Marie-Antionette’s cell has been reconstructed complete with wax figures of Marie-Antoinette and the prison guards watching her. 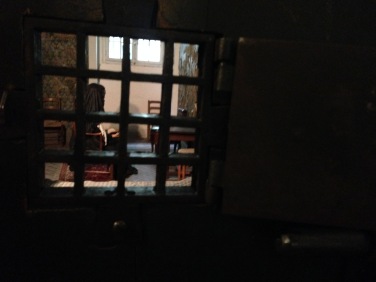 The point here is to build up to this re-located, re-imagined site of Marie-Antoinette’s incarceration prior to her execution as a grande finale to the visit. This works both to assure effective circulation and avoid congestion around the narrow space of the former prison and also to create a sense of anticipation leading up to what is essentially a fairly lacklustre exhibit. Next to the cell is a seating area with a powerpoint telling the story of Marie-Antoinette’s life, downfall and death projected onto the wall. Marie-Antoinette is constructed within a Catholic iconography of sainthood embodied in the centre piece dedicated to her in the chapelle expiatoire as well as religious relics and personal effects including a water jug she used shortly before her execution. This shifts the focus from the prison and its cells to the historical figure and the aura surrounding her presence within the space rather than the prison and its cells as site of terror. The upstairs area includes a room dedicated to listing all those guillotined as part of the revolutionary terror. The list is impressive in its length but its depersonalisation of those named contrasts starkly with the shrine-like depiction of Marie-Antoinette. 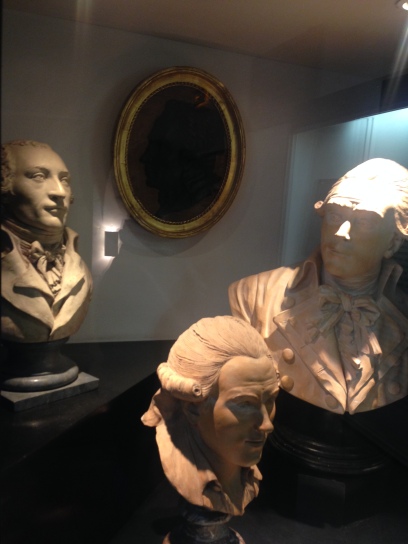 Subsequent rooms focus on the history of law and order, embedding this into a larger history of power and revolution. Cabinets display a range of artefacts including busts of Robespierre, a written request from Napoleon asking for a pedicure and a collection of locks, keys and shackles.

Little has been done here to make the history engaging or interactive. No questions are asked of the artefacts or links made with the present. The most concerted attempt at calling on visitors to imagine prison life at the Conciergerie was the reconstruction of cells and, in particular, the descriptions of different types of cell accommodation for prisoners of different social levels and financial means. Even after her escape attempt resulted in reduced quality accommodation, there is a marked contrast with Marie-Antoinette’s cell and the straw covered cells which were offered to those without the money to pay for a bed. Yet, there is no real commentary on the social hierarchies which play out in prisons today as inmates in France are obliged to pay for their food, clothing and other basic items during their sentences.

Enter and exit through the gift shop 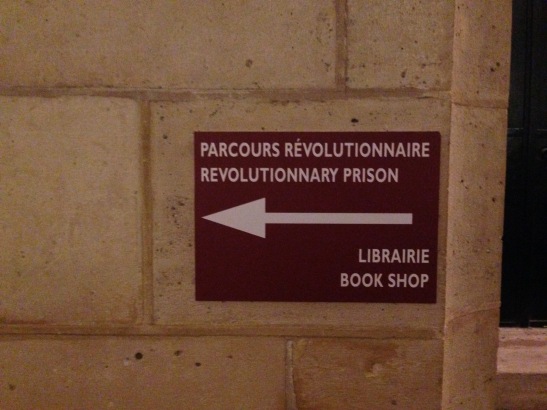 I am always interested in the objects privileged by prison museum gift shops. The conciergerie like other sites belonging to the Centre des Monuments Nationaux is focused around the idea of the bookshop but unlike buildings and other spaces focused on recent, dark pasts such as Camp des Milles near Aix-en-Provence, la Conciergerie can use the ambiguity of its history to sell other stuff including unicorns, tapestry cushions and artisanal paté. 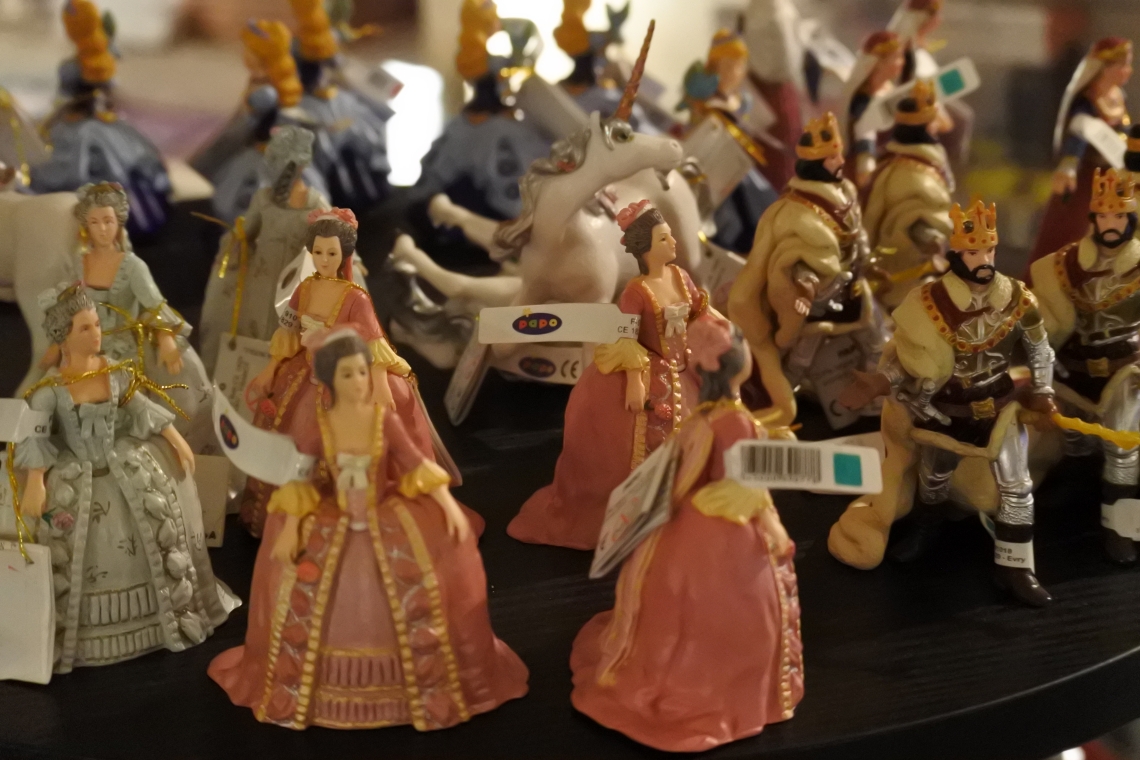 The dedicated Marie-Antoinette section of the shop emphasized her gender rather than political biography with a selection of (cakes of) soap, chocolates, lavender sachets and books of cut-out paper dresses. 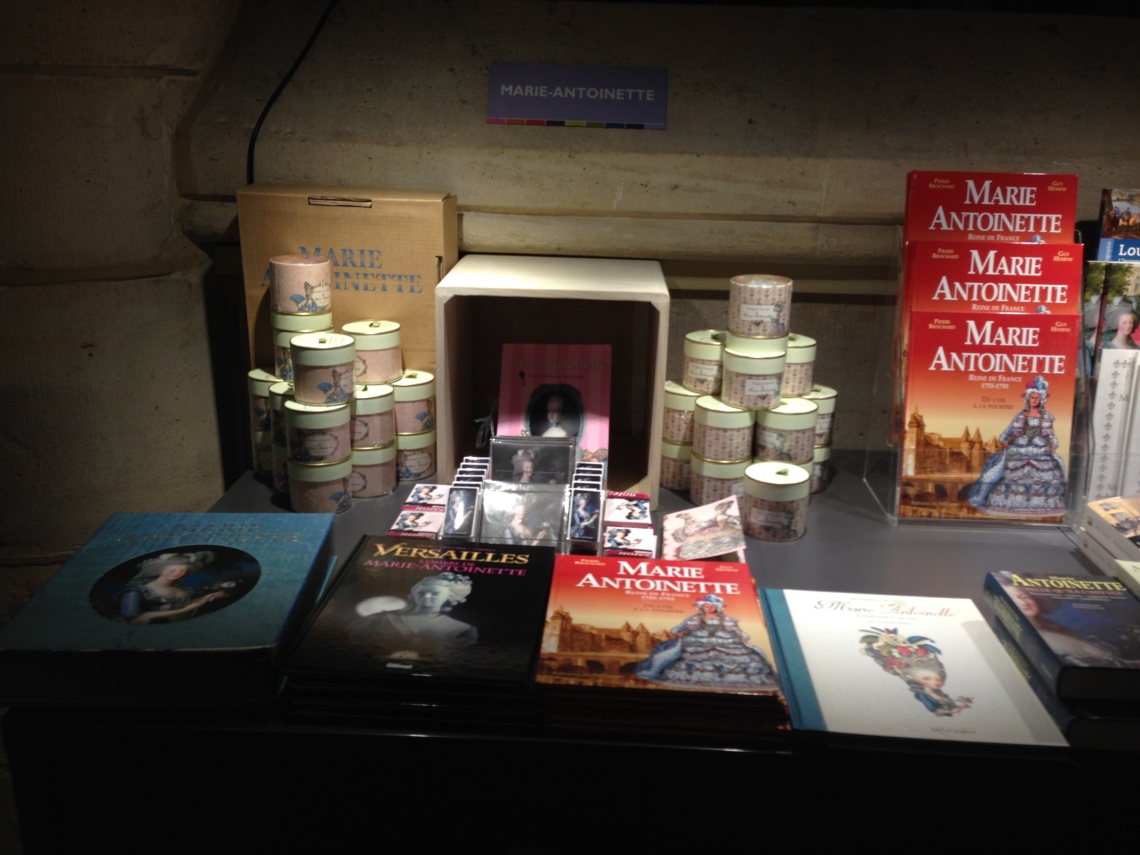 There was a section on architecture but no books on prison architecture or memorials. A section dedicated to medieval cookery also included pate, soup and wine. Children’s books in both English and French focused on medieval folklore, colouring books and it was possible to find a cartoon reworking of Marie-Antoinette’s biography complete with spot the difference and maze puzzles at the end. Interestingly, the story ends with a visual depiction of her court case rather than her execution. Another children’s book tells her story from the perspective of her pet dog.

Where in the UK and elsewhere (notably Japan) castle and prison museums sell replica and key ring shackles and padlocks, the closest thing I found here was a faux-oversized, medieval keys fashioned into coat hooks. 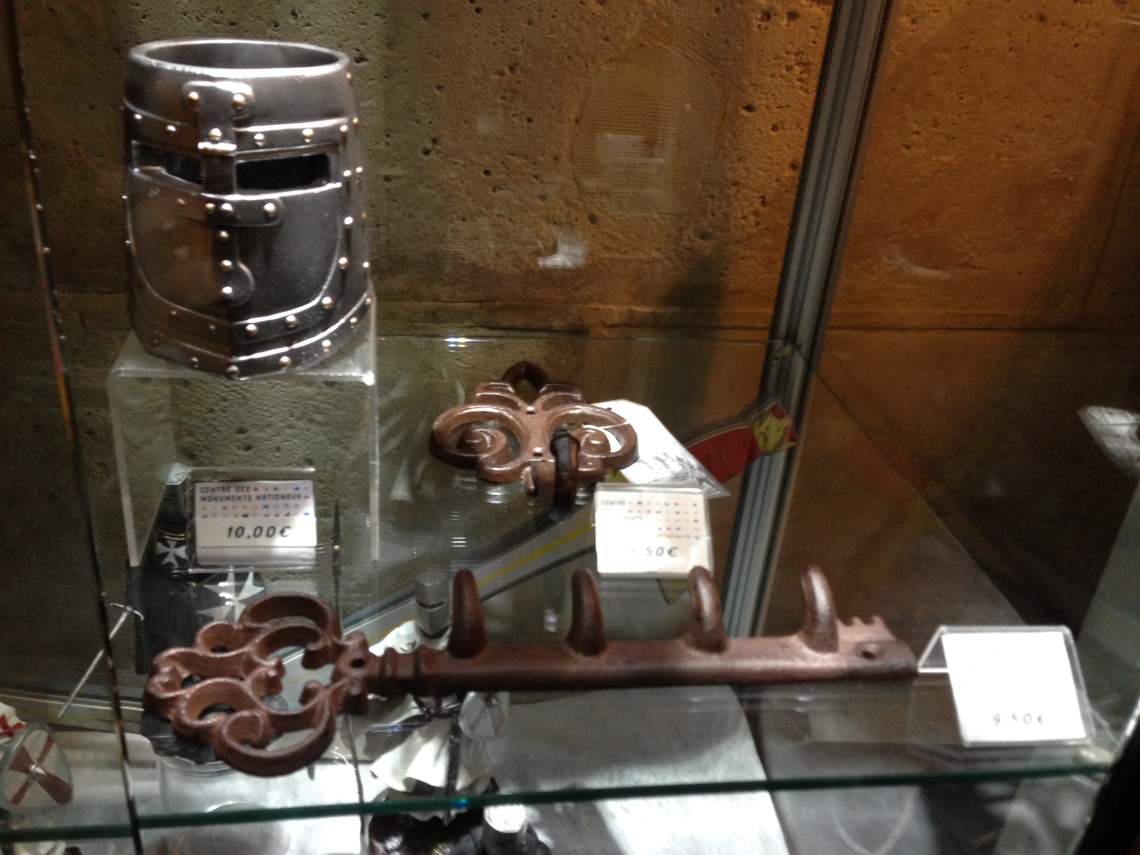 It’s not often that a visitor book is simply left on a table in a museum these days. Focused surveys and questionnaires are usually conducted on tablets or touch screen displays. Many of the comments simply expressed an unconditional love for Paris but there were one or two interesting remarks…