These are just some preliminary thoughts about the museum and specifically the small outdoor section dedicated to what is referred to as the ‘prison regime in the aggression war against Vietnam’. The section is located past the outdoor display of military vehicles including tanks and a US helicopter. Just as inside the main museum building there is a section focused around the use and effects of Agent Orange, the small prison section emphasizes imprisonment and the routine torture and execution that took place at two main island sites – Con Son and Phu Quoc – both under French colonial rule and during the American war. Moreover, as a large map indicates, these were just two sites that formed part of an extensive prison network used by the French administration. Incarceration is a key strategy of colonialism. 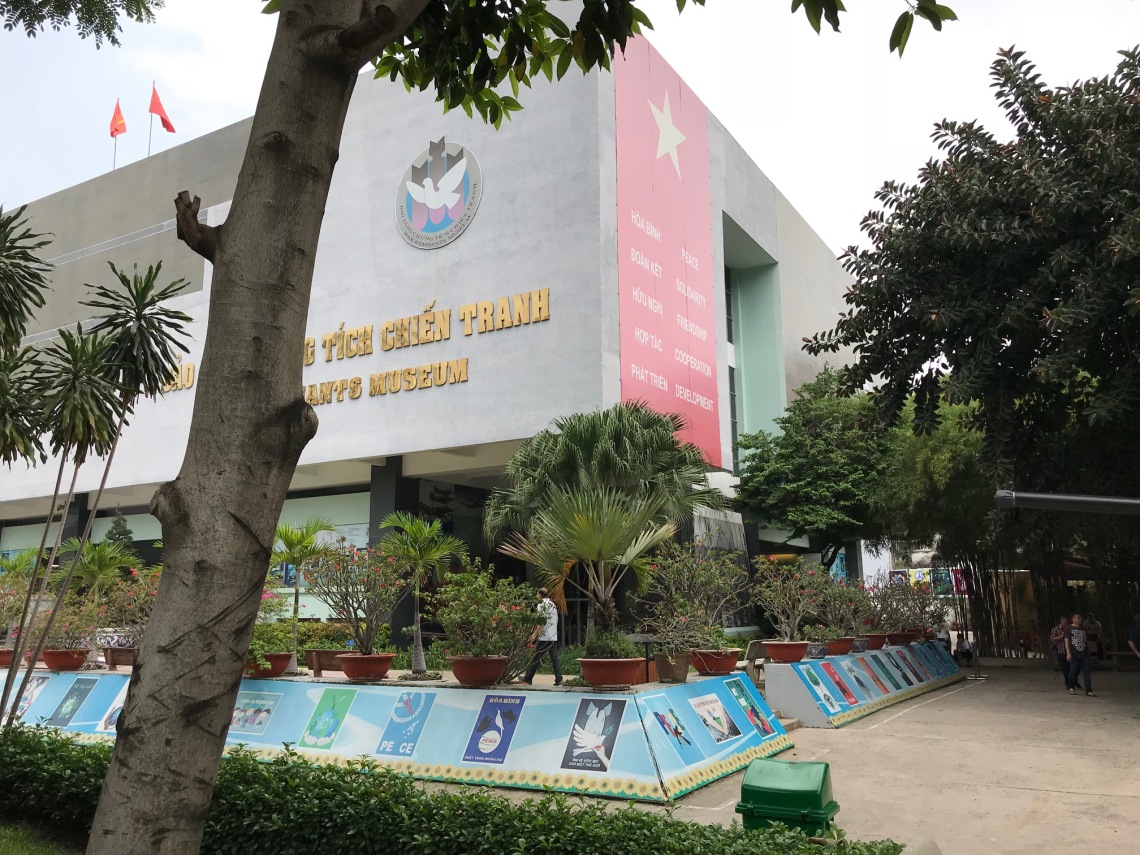 There are two entrances to the space and depending on which one you enter from, the narrative differs significantly. This reminds me of the section on capital punishment at The National Justice museum where you can enter via a reconstructed cell of a condemned man or woman leading to the original trap door used for the very last hangings at Wandsworth prison before a detailed display history of capital punishment in the UK and finally a series of infographics on the continued use of capital punishment globally. If you enter the other way you start with the present day global statistics and finish the narrative with the reconstructed trap door and cell. Both routes celebrate UK penal reforms but one direction emphasizes an abstract human rights discourse, affirming the superiority of the UK above other nation-states where the death penalty is still in place and the other concludes with the macabre, transgressive experience of standing in the place of the condemned. The comparison is all the more significant given the display at the War Remnants museum of the guillotine introduced to Vietnam by the French in the early 20th Century.

The double entrance is also unusual given the often carefully curated museum tours found elsewhere that insist on a certain route and fixed narrative regardless of claims to interactivity, participation and reflection – Joe Day calls this the ‘infotestine’ in Corrections and Collections: Architectures for Art and Crime (2013). To enter the prison display from the left hand side means encountering the guillotine first. Given the plethora of horrors described throughout the space, the guillotine seen first comes to represent the more humane of the practices detailed including the tiger cages and the description of how prisoners were buried alive in front of others as a deterrent. Seen in reverse as the final display it perhaps embodies a more cumulative, symbolic function which exceeds its physical presence similar to the expression ‘guillotine sèche’ [dry guillotine] which was used to refer to the Penal Administration or bagne that operated in French Guiana. I was recently told that the display of the guillotine is illegal in France which means it has become a more powerful symbol at sites associated with French colonial rule despite often not being used extensively (due to other available forms of cruelty and torture). According to the exhibition, the guillotine was initially housed at the Maison Central prison on rue Lagrandière (subsequently renamed Ly Tu Trong Street after one of the prison’s most famous inmates) before being taken around South Vietnam during the American War and used to execute Vietnamese patriots. The final execution using the guillotine took place in 1960.

Immediately following the cell where the guillotine is located, there is a rusted hutch known as a ‘barbed tiger cage’ (in contrast to the cells with ceiling bars also known as ‘tiger cages’, a couple of examples of which have been reconstructed in the exhibition). This is perhaps the most notorious of objects associated with France’s colonial rule in Vietnam. Barely larger than a rabbit hutch, this type of cage would contain one sometimes two prisoners unable to sit up or lie down fully within the space, placed outside and subjected to direct sun without food or water for days. Unlike objects such as shackles and leg irons that are often used interactively to fetishise imprisonment and associated forms of restraint and torture, to see a cage like this up close makes it harder not easier to imagine its use less than a hundred years ago. And that is perhaps what should happen in a prison museum.

I plan to say more on this in a future post.