The Clink prison (named after the sounds of clinking chains) was open between 1144 and 1780. It’s museum is open 7 days a week and boasts that it is ‘real history’ – most likely a desperate claim made in response to the themepark history of the heavily promoted London tombs experience (formerly the London Dungeons) nearby.

Inside, the focus is, unsurprisingly, on the particularly gruesome nature of incarceration in medieval London. Of note here, is the ‘oubliette’, the name given to solitary confinement, a hole which regularly flooded leaving prisoners immersed in raw sewage. Elsewhere, the concerted attempt to ‘engage’ visitors, especially children, in the exhibition makes them read as a 101 in ‘how to incarcerate’. 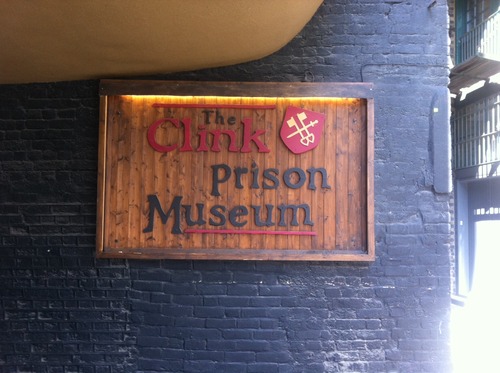 There are step-by-step instructions on how to forge manacles, a list of ways in which money could be made from prisoners and, as part of the little rodents trail aimed at younger visitors, a ‘how far would you go’? quiz on the acceptability of torture during the Spanish inquisition. Worryingly, the implication here is that torture is always acceptable in certain circumstances.

What the museum shows most forcibly is the relationship between suffering and debt that prison continues to embody and which attests to its continued status as mode of punishment par excellence within contemporary society. Prison was intended to cause physical suffering in the form of associated violence inflicted upon the imprisoned body. The healing of wounds was considered to provide evidence of the ‘moral’ healing of the prisoner. As Wacquant points out in Punishing the Poor, today’s prisons cannot only be described in terms of industrial-complexes aimed at turning a profit. At stake, is the same form of public moral indignation which demands a series of suffering be inscribed onto the bodies of those incarcerated. They cannot simply be put to work until their ‘debt’ to society is paid off. Their bodies must be permanently marked with no possibility of healing. Marked by rape, beatings, gang tattoos, poor diet, sensory deprivation, lack of exercise but also marked onto registers which deprive them of welfare on release, access to public housing, employment and, in the case of sex offenders, ensure they are hunted and vilified for the rest of their lives.

Today, with debt once more being held up as the worse form of crime, we are not seeing a return to medieval attitudes towards poverty but rather, the persistence of a strategy of punishing the weaker members of society through public spectacles of pain and suffering.